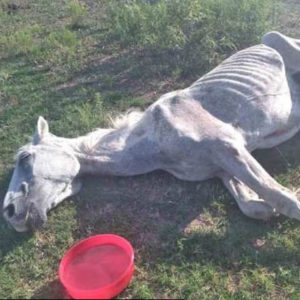 Hello friends. I would like to share a few thoughts that have crossed my mind a few times since Saturday, August 18th – the day Angel the horse died. Even though Angel was an animal, she was God’s creation, and she was certainly in need of help no matter what side of the story you are on. The truth is, however, I’ve been pondering quite a bit on the topic of “the least of these” and my thoughts are on how the uproar surrounding Angel’s death should be the reaction for every living creature – not just animals.

Disclosure: My thoughts are exactly that…my thoughts. They are not meant to judge, condemn, or discriminate against anyone or any of God’s creation. My opinions are also not meant to put myself above anyone else; I am a man who makes mistakes like everyone else. Truth is, I’m no better than the man that’s supposedly mistreating his animals or even the people casting judgment before they know the full truth. So please, take the words I’m sharing as information that can be productive instead of destructive to those who really care. To God be the glory!

Angel and the suffering of many
As sad as the “Angel” case may seem, it’s nothing compared to the suffering we (myself included) turn a blind eye to every day. It is sad to see any animal suffer, especially when it’s preventable. By the way, I’m very proud of the young lady (who is a personal friend of mine) for her passion and love for animals. It just so happens I’ve seen her do the same for a human – that’s right…she would even do this for one of those “lazy” “worthless” humans we call “THE HOMELESS”! You know the ones I’m talking about…the ones that no one else wants, who have become a menace to our society.

It also puzzles me that we have so many in an uproar (mad, energized to the point of doing whatever it takes to be heard) over the way this person’s animals are being treated when considering that since the very hour that my friend stopped to check on Angel, approximately 48,000 children have died from waterborne illness or preventable diseases. That’s right, statistics say that every 30 seconds a child dies from a preventable disease; yet, we don’t talk on Facebook about what we can do to fix that problem.

Not to mention that since this all started on the 18th, approximately 3000 people have died from drug overdose in our country. You want to see something sad? Walk the streets of Austin with me and see the people dying from K2 and heroin addiction. STOP, look at that dying man or women, and look back in your mind 20 or 30 years back when that person was an infant. An infant that everyone loved and talked about so much- how beautiful he or she was and how one day they were going to be great! What happened? Where did that unconditional love go?

Just last week I met a young lady who has been homeless since she aged out of the foster care system. She had joined the foster system at the age of 2 and was kicked out at 18 when her foster parents lost their support money. This happens far more often than most people know. Over 50% of the 4000 homeless in Austin came out of the foster care system. Another lady I recently met was present with her third child living in a women’s shelter. No one is there for her except the paid staff and the ladies who live in the same shelter. Now, whose fault is that?

The truth is we live in a fallen world and, instead of doing something about it, most cast judgement on our system, or sometimes even go as far as blaming ethnicity. People are literally laying and dying on the streets and people drive right by like they aren’t even there. The one that gets me is when people say…”get a job.” Let me ask you a question – would you hire them? No, you probably wouldn’t. Instead, you would leave that up to the others, but in reality, they probably wouldn’t hire them either. There are many more horrible statistics but I will spare you the sadness!

Now I certainly don’t have a problem with people supporting the health and well-being of any animal. I LOVE ANIMALS! I do pray that one day the passion that has lit up social media for Angel, would light up for the innocent children who are dying around the world; and maybe even the homeless, drug addicts, alcoholics, and the women living in shelters that are all around us. Now, I must inform the reader that there are people out there that do care for the dying children, homeless, drug addicts, and whoever else fits in the “least of these” category. My point is…WE CAN DO SO MUCH MORE!

So, what’s the answer you ask? The answer is in The Gospel of Matthew, Chapters 5-7 – and throughout the “Good Book”. Jesus said that WE are the light of the world, THE salt of the earth. He even said to “love our neighbor as He has loved us”! Being a “Humanitarian” is great, but the Body of Christ has been commanded to LOVE OUR NEIGHBORS! Let’s hold each other accountable (in love of course) and make a difference. Think of the generations that can be saved when we say “Yes, I am willing!”

For more information concerning ministries that YOU can support or volunteer in, please feel free to give me a call or visit heirsofgrace.church.